Candy Land (1984), also subtitled A Child's First Game, is the sixth version of the popular board game series. It was preceded by the 1978 version, and followed by the 1999 version.

This is the first edition of Candy Land published by Hasbro after they bought out the Milton Bradley Company and gained the rights to the franchise. Hasbro hired the Landmark Entertainment Group to redesign the classic game with a new narrative. They introduced The Legend of the Lost Candy Castle, a text insert which establishes for the first time both named characters and a plot in the game. This controversial update is part of an overall trend with youth marketing in the 1980's. The deregulation of advertising towards children by Ronald Reagan created an era where children's media became synonymous with the cross-promotional toy commercial.[1] Hasbro found success using this formula with properties like G.I. Joe, My Little Pony, and Transformers. The new Candy Land figures would go on to be loved by many, but it is important to remember this context.

The Legend of the Lost Candy Castle provides some brief backstory on these new characters and where they fit into the world. The Gingerbread Plum Tree is now an orchard overseen by Plumpy, a green Lorax-esque figure. There is now a keeper of the Peppermint Forest, a clown-like lumberjack named Mr. Mint. The Gumdrop Mountains have a greeter named Jolly, and it is very unclear exactly what Jolly is or does. The Crooked Old Peanut Brittle House, empty for years, is now the home of the kindly Gramma Nutt. Molasses Swamp has become the new residence of a monster known only as Gloppy. The drama in this story is predictably attached to Candy Land's new royal family. King Kandy, beloved patriarch, has mysteriously disappeared alongside his home Candy Castle (which appears to be made of ice cream spires with cone walls). The culprit is the villainous Lord Licorice, who resides in Licorice Castle with his Bitter Chocolate Bats. Queen Frostine of the Ice Cream Sea and Princess Lolly of the Lollipop Woods enlist the "Candy Land Kids" to help find Candy Castle.

The new version of the board remains remarkably faithful to the original in many ways. There are however some major structural changes. The Candy Hearts, present since the beginning, have been completely eradicated to make room for Licorice Castle as a new addition. You gotta give Lord Licorice credit for not mucking around with subtlety. Their space also swaps positions with the Gingerbread Plum Tree, traditionally in the center, putting Plumpy at the beginning of the board. Once again the plum tree can be seen containing actual plums, not assorted snack cakes, presumably thanks to Plumpy's stewardship. There are minor tweaks to other properties, the formerly "Ice Cream Floats" are now the "Ice Cream Sea." It is never completely explained who keeps dumping ice cream in the water or why they are doing it. The "Peanut Brittle House" has dropped the descriptor "Crooked Little." Candy Castle also completely replaces "Home Sweet Home" the previous end goal of the game. This is a pivotal shift into a very different type of escapism and a fundamentally new direction for the series. Eleanor Abbott designed the original as a comforting thought of returning home for children in her polio ward. The fantasy delivered now is an epic quest where one might imagine action and adventure, the forces of good triumphing over the forces of evil. 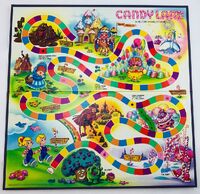 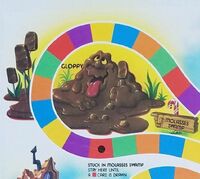 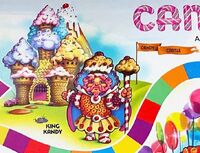 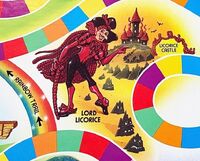