Originally known as 'Queen Frostine', Princess Frostine is married to King Kandy, and their daughter is Princess Lolly.

It should be noted that in the newer versions, the Princesses appear to be sisters instead.

The reasons for turning Queen Frostine into a princess are unknown, and the change was negatively received by many fans of the classic. Despite this, Frostine remains a princess in modern renditions of the game.

In the 80's and 90's board game, she is described as being kind and wise, not feeling at all threatened by Lord Licorice as Candy Land will always shine in its full glory once more.

In the 2002 board, she is described as being "everything you could want in a wife."

In Candy Land: The Great Lollipop Adventure she is given no personality, skating while Lolly tries to confide in her, and saying "Daddy knows best" but still offering the advice to go see Gramma Nutt. This is mainly because Frostine was treated as a minor character in the film 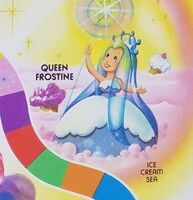 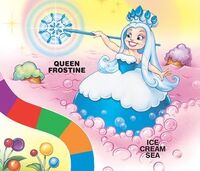 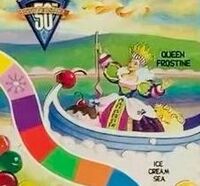 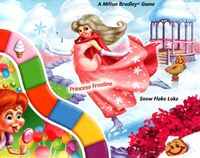 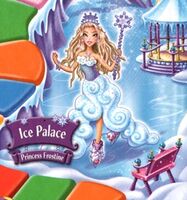 There are currently no external links listed for this article.